In the countryside of Concord, Virginia, zinnias, limelight hydrangeas, cosmos, gladiolus, snapdragons, and sunflowers have taken root under the summer sun on Wool Branch Farm.

Owners Adam and Amy Bigham first met when they were students at Rustburg High School. Remaining friends through the years they married in 2007 and went on to have their son, Eli, and daughter, Emi. They purchased 10 acres from Amy’s grandfather’s cattle farm with a desire to remain local and around their family. Along with their full-time jobs they wanted to use the land to grow something and began to experiment. Their operation commenced by growing hemp which progressed to purchasing a few sheep. Their son became fascinated by them, and many Livestock shows later in addition to 20 sheep, they had the inspiration for their name, Wool Branch Farm.

Since it would take several years for their 120 dwarf apple and peach trees to mature enough to bear fruit, they decided to expand their flower garden. The flowers flourished in such abundance they began to wonder what to do with them all. Coming across an image of a flower cart prompted them to purchase an antique truck bed which Adam transformed into their infamous antique flower cart by building on the sides, roof, and ledges.

Once spring arrived they took their flowers on the road to the Appomattox Farmers Market where they have found success and support. It is truly a labor of love for them, “My favorite time of the week is Friday evenings when we come out to pick flowers for the farmers market. It is very quiet and peaceful,” Adam says, “It is a lot of work preparing for the market, but each Saturday gets better.” The cart bursting with flowers in the center of the market conquers up visions of a bright bouquet in the middle of a dining room table.

Recently they started offering classes where groups can come to the farm to make their own arrangements. Amy guides the guests through the process by showing them which flowers are ready to pick as well as how to prune and assemble them in their vases to make a personalized array. “I pick some of the flowers and have buckets ready, but if they want to walk around and pick some themselves, they can! They have a great time coming out, fellowshipping with other ladies and being able to make a nice bouquet to take home with them.” The gardens have also proven to be an optimal site for private photo sessions giving photographers a festive location for portraits.

The couple hopes to continue to expand their business by offering more classes, fruit from their soon-to-be mature trees, and having their own beehives to harvest honey. What better combination than local, raw honey alongside the flowers and fruit that helped produce it!

Swing by the Appomattox Farmers market on Saturdays from 8 am-12 pm, Concord Elementary once during the week, or the farm to pick up flowers from your local flower farmers. 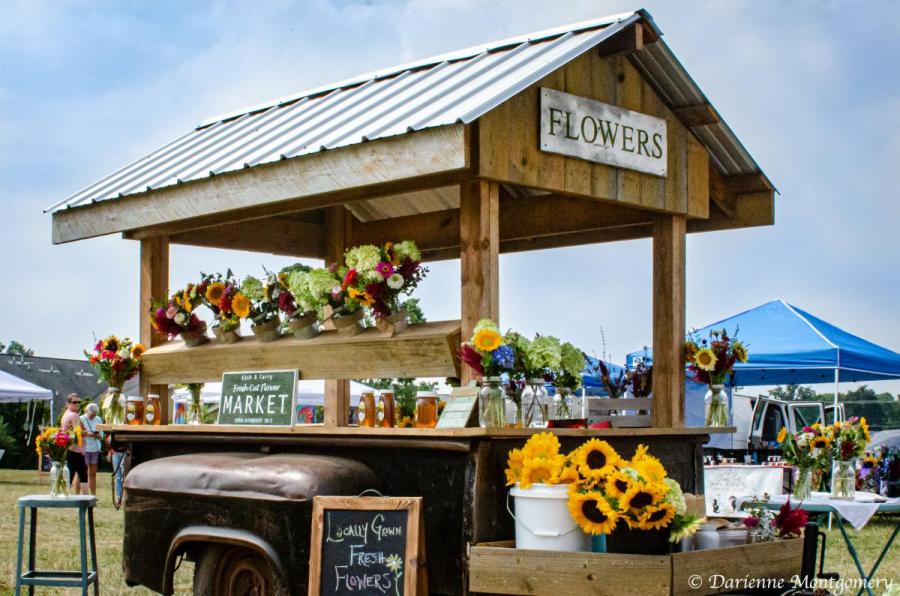